What is Ewing’s Sarcoma?

Ewing’s Sarcoma is a cancerous tumour in the bone that primarily affects children. It is a very rare form of bone cancer that affects adolescents and young children. Ewing’s Sarcoma is caused by an alteration in the chromosomal arrangement of the child after birth.

There are no known reason why the chromosomes are altered, there are also no definite risk factors associated with Ewing’s Sarcoma. This condition is rare that is why we have few studies to use and the data are only able to describe the characteristics of Ewing’s Sarcoma. 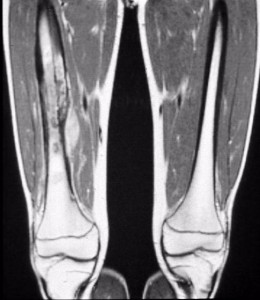 Ewing’s Sarcoma on the Right Femur

The symptoms of Ewing’s Sarcoma is easy to note. However, they are very general and it may be related to other conditions. In some cases, a fracture can happen just after a minor injury. I have listed the symptoms that may indicate that a child has Ewing’s Sarcoma. 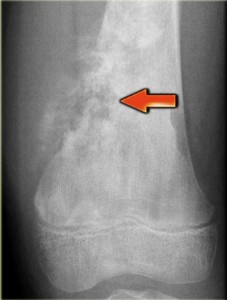 Ewing’s Sarcoma is a rare condition that affects children aged 10 – 20. This is because the bones are growing very fast in this age. The bone tumor may grow anywhere in the body.

Usually, it can be seen at the long bones (arms and legs). It can also develop in our short and flat bones (like skull, pelvis, and scapula). Bones cancer can spread to the lungs and other adjacent organs. Although we have discussed that this condition targets children, it can also appear in adults.

To fully diagnose Ewing’s Sarcoma, we need to have a series of tests done to the patient. I will list down the diagnostic tests and exams here.

Children is the most common victim of Ewing’s Sarcoma, using that statement, we will need to use chemotherapy as a last resort treatment regimen. Chemotherapy is a treatment regimen that halts the growth and multiplication of the cancer cells, but this therapy will also halt the growth and multiplication of all cells in our body. In that case, if we use a chemotherapy, this will stunt the growth and development process of the child. Although that is a fact, this logic is not followed by doctors because they believe that we should intervene with Ewing’s Sarcoma immediately. This conflict caused a controversy whether to choose a safer treatment or use chemotherapy.

This is the most preferred method because this will remove the tumor out of our body.

Since Ewing’s Sarcoma is a type of cancer, we can give the patient chemotherapy sessions. This method will kill the cancer cells; however, this can also kill our normal cells in the body.

These are the factors that will affect the prognosis of children who have Ewing’s sarcoma: