What is Histiocytic Sarcoma?

Histiocytic Sarcoma is an aggressive neoplasia originated from histiocytes. The characteristic features of the malignant proliferation of this rare histiocytic neoplasia involve morphological and immunohistochemical alterations1.

While histiocytic sarcoma mostly affects middle- aged to older dogs, it can also be seen in dogs that are as young as 3 years. It is mainly found in dog breeds including Golden Retrievers, Flat-coated Retrievers, Bernese Mountain Dogs and Rottweilers. Though sporadically, the disease may still exist in other dog breeds. Dogs that have histiocytic sarcoma in their joints and limbs tend to have obvious mass and lameness. Where the disease affects the lungs, it presents with exercise tolerance, lethargy, coughing, and dyspnea or difficulty breathing.6

Environmental and genetic factors are not involved in the predisposition of the Histiocytic Sarcoma. The Histiocytic Sarcoma can develop alone or associated with other hematologic neoplasms, which may include myelodysplasia, follicular lymphoma, or acute lymphoblastic leukemia1,2.

Both men and women have the equal tenacity of developing the condition. Histiocytic Sarcoma can develop at different organs including skin, GI tract, and spleen. The mean age of onset of Histiocytic Sarcoma is 46 years, therefore it is an adulthood neoplasm1,3,4.

It has been assumed that Langerhans cells are definite dendritic cells present in the skin and mucosa involves in Langerhans cell histiocytosis. The monocyte-macrophagic cellular lining is responsible for non-Langerhans histiocytoses.

The histiocytic proliferation of malignant cells resultant of partial or complete effacement may appear due to histiocytic sarcoma affects lymph nodes.

The extent of cellular pleomorphism is comparable with mitotic activity level. However, these parameters do not follow evenness. The histological characteristic of the malignant cells includes eccentrically-placed, larger sized oval nucleus with the single prominent irregular nucleolus and vesicular chromatin.

The nucleus and the organelles of the malignant cells are immerged in cytoplasm, which is eosinophilic. The characteristic feature of the cytoplasm may include frothy or vacuolated.

Multiple, over sized nucleus and multiple nucleoli can also present in the malignant cell. It is observed that the cytological structure of the tumor is not similar to normal cell, therefore, molecular study and immunophenotyping required for diagnosis.

The above mentioned all the clinical features may not be manifested in all the cases. Symptoms of the disease are appeared depending on the site involvement. Like rashes appear in case of skin involvement, association with spleen cause splenomegaly etc1,2,4,5. 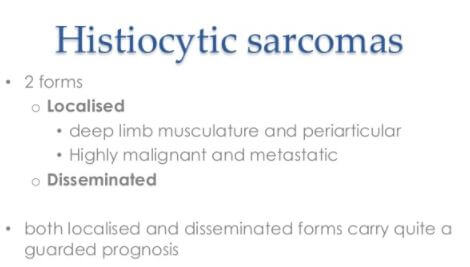 The findings of the anatomopathological study in the case of histiocytic sarcoma include asymmetrical nucleus and nucleolus containing large sized cells. Some affected cells can have binucleated cells with eosinophilic cytoplasm.

The presence of these typical cellular characteristics is considered as an affirmative for the CD4, CD68 and CD163 antigens, which favors histiocytic proliferation.

However, Langerin and CD1a do not have a similar type of result and this excludes the potential of the differential diagnoses of giant cell lymphoma and dendritic cell sarcoma.

In advance stage, multiple lymph nodes including cervical, retroperitoneal and mediastinal are involved. Therefore, surgical intervention may not be possible to apply1,5.

Applying definitive therapeutic approach to treat histiocytic sarcoma offers the best clinical response. It also offers the best duration of remission, implying disappearance of observable cancer. That said, it is important to realize that even after using the best treatments and intentions, it is likely that dissemination or metastasis is going to develop in dogs having histiocytic sarcoma. The dogs will ultimately die of the cancer.

A curative intent approach usually entails the use of surgical excision targeting the primary tumor often with wider surgical margins. Where there is splenic involvement, the surgical excision used is splenectomy and in the case of lung involvement, usually lung lobectomy is applied. Where joints or limbs are involved, amputation is used. When surgically is performed, it is followed by chemotherapy. At times, radiation may be opted as a post operative procedure if the event that clean margins weren’t achieved through surgery.

In definitive treatment, it may institute chemotherapy as a post operative treatment to help in delay the cancer from progressing to spread to other areas.  A medication known as CCNU (Lomustine) is administered orally in every 3 weeks and this goes on for 5 times.

This approach is applied in dogs that have the cancer disseminated or metastasizing at the cancer is first diagnosed. It may also be applied if the tumor cannot be removed through surgery. The aim of having palliative intent is to help diminish the signs (clinical) associated with the cancer as well as maintain the dog’s quality of life. In palliative treatment, a combination of treatments may be applied. For example, surgery or amputation may be combined with other treatments such as radiotherapy, chemotherapy, and oral analgesic agents. 6

The available chemotherapy is less potential to provide effective result and outcome of this condition is high mortality due to its aggressive nature.

The fast progressive condition of Histiocytic sarcoma causes death within 2 years of the identification of the condition. However, chemotherapy with or without radiation therapy shows the effective result to some patients. It is often possible that adverse effect of chemotherapy is also responsible for poor prognosis1,5.