What is Nodular Melanoma?

Melanoma is a type of skin cancer and is the most severe. Melanoma accounts for many skin cancer deaths as compared to the other forms of cancer put together. Melanoma develops in deep areas of your body which are difficult to see such as inside the mouth and genitals. It is for this reason that melanoma is not easily detected and it is lethal1, 3, 4. There are several subtypes of melanoma and one of them is nodular melanoma. Just like other subtypes, nodular melanoma develops in the skin cells that produce melanin, that pigment that gives the skin its color. Nodular melanoma accounts for about 15% of all skin cancer cases and it is the most aggressive form of melanoma5. 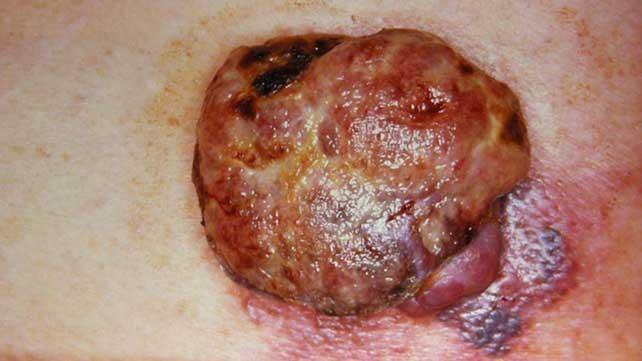 Nodular melanoma can affect both the young and the old but it is more common in older people. Both female and male are affected but it is more prevalent in males according to some studies.

The following are potential causes of nodular melanoma:3 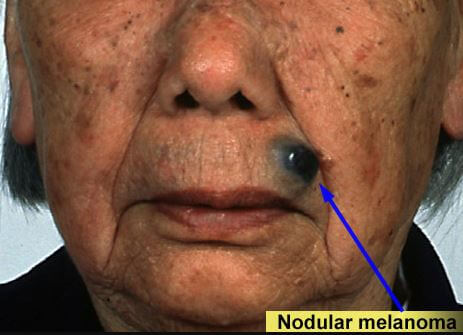 When you are exposed to ultraviolet radiation, most of it is absorbed in your skin and can damage the genetic material in the cells. This increases your vulnerability to melanoma.

Most of melanomas occur as a result of mutations in the BRAF oncogene. Mutations in CDKN2A gene can also cause melanoma. These defective genes are passed from affected parents to the child.

A number of factors can elevate your risk for nodular melanoma. They are as follows:3, 4

Symptoms of nodular melanoma include:2 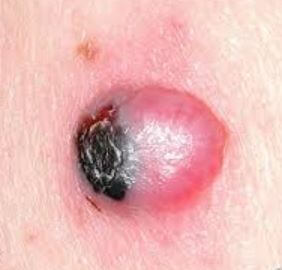 Nodular melanoma can be diagnosed through the following:3

Your doctor studies your past health record and assesses your skin so as to get information about this condition.

After the physical examination, your doctor scraps a sample of the skin on the affected area and takes it for pathological assessment. There are different types of biopsy that can be conducted: They include:

In this type of biopsy, your doctor injects an anesthesia near the affected area to numb it and make you comfortable as the operation is done. Your doctor removes the whole mole and a small margin of nearby skin. 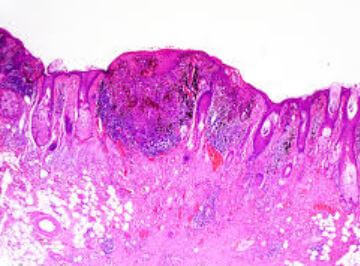 Your doctor uses a sharp knife to surgical remove the tumor.

This test is performed to determine if melanoma has spread to lymph nodes. To conduct this test, your doctor injects a certain dye in the place where melanoma is. The lymph node that absorbs the dye first, a sample is taken from it and examined if it has cancer.

In case the cancer is suspected to spread to other areas of your body, imaging tests such a magnetic resonance imaging scan and computerized tomography are used to scan your body and reveal where the cancer has spread to.

There are many methods for treating melanoma. But the choice of the most suitable method to use depends on the extend the cancer has spread or progressed in your body. This is made possible during staging stage; staging is done to find out how far cancer has spread in the body. In this stage, several factors are considered so as to classify the tumor into stages. These factors include:1, 4

The tumor is classified into four stages; stage 1 and 11 are early stages of melanoma while III and IV are later stages where melanoma has spread to other areas beyond the skin. For early stage melanoma, surgery is the most preferred option of treatment while the later stages, several treatment methods are a combined to manage the cancer.

The following are some of treatment options for melanoma:

This treatment option involves the use of drugs to destroy cancerous cells. Chemo drugs can be given as an injection or oral pills. Chemotherapy can make the patient to vomit, lose appetite and have diarrhea.

In this method, drugs are used specifically for melanoma and not normal cells in your body. Since most of melanoma is as a result of mutation in the BRAF gene, a drug called vemurafenib is used to manage melanoma.

This method uses powerful radiation to destroy cancer cells. Radiation therapy is used to relieve the symptoms of melanoma.

This method is used to enhance the immune system so as it effectively protects the body against infection. Drugs used to boast your immune system include: interleukin-2 and cytokines- interferon alpha.

You can take a few measures to prevent nodular melanoma from developing in your body such as: