What is Alveolar Soft Part Sarcoma? 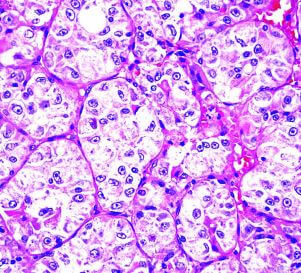 In USA, Christopherson and his colleagues, Drs Foote and Stewart worked at Memorial Sloan-Kettering Cancer Center, New York and they first described and termed the Alveolar Soft Part Sarcoma1,2.

The characteristics features of the Alveolar Soft Part Sarcoma include

Both adults and children can get affected with Alveolar Soft Part Sarcoma. The onset of the disease mainly occurs at the younger age or adolescent age group. In addition, it is also observed that females are mostly affected than males1,2.

The confirmatory result can be obtained by performing a biopsy. A small tissue is collected from the developed mass and thoroughly study the tissue under a microscope. The core needle biopsy test is applied in the case of sufficient mass formation; but in the case of application difficulty of the core needle biopsy, then the tissue sample is collected by an incisional biopsy.

The sample of biopsy is transferred to the laboratory for testing the characteristic features and genetic involvement for confirmation of the presence of the Alveolar Soft Part Sarcoma.

Other imaging tools applied to diagnosis the Alveolar Soft Part Sarcoma are computed tomography (CT) scans or magnetic resonance imaging (MRI) scans. These tests can help to assist the detect the location of the tumor and also provide understanding that the position of the mass is removed or not.

CT scan is typical diagnostic tool applied in the case of presence of tumor in the lungs. Alveolar Soft Part Sarcoma usually not affect lymph nodes, but they affect blood vessels and reach to distant organs including lungs and other organs1,3.

Surgery and radiation therapy is applied in patients with brain metastases of the Alveolar Soft Part Sarcoma. The treatment plan is made depending upon the location of the mass, the size of the tumor and the stage of the malignancy.

The identification of the fusion of gene may provide an advance therapeutic approach in future, though for this detailed series of study require1,3,4.

Clinical trial reports showed that most of the affected individuals with proper treatment and follow-up can give more than five years of the survival rate. Early aged patient with a small sized tumor in orbit and lingual tumor also have high survival rate1,3.