Trichoepithelioma is a benign neoplasm of the adnexa on the skin. It resembles carcinoma of the skin; however, it is harmless. Trichoepithelioma is uncommon and results in single or multiple tumors that develop in the skin after the pubertal stage. Trichoepithelioma develops rudimentary hair follicles, however, these does not necessarily contain hair shafts. The condition is more apparent in women and there is a tendency to inherit the condition. It is an autosomal dominant trait, which means that men and women have equal chances of getting it, but women are more prone to developing it because of lesser expression in men.

The tumors are usually small and only measure up to less than a centimeter. It is rounded, firm and shiny. These tumors increase in number as the person ages and it occurs on the eyelids, cheeks and nose. 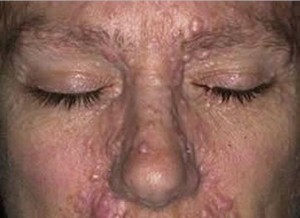 There are three types of trichoepithelioma, which include:


In contrast to basal cell carcinoma, tumors from trichoepithelioma lack myxoid stroma and mitoses are uncommon. It usually has a slow growth and only reaches up to less than a centimeter in size.

In familial trichoepithelioma, the gene responsible for its development is the chromosome 9p21. Other cases of trichoepithelioma caused by Brooke-Spiegler syndrome is mapped to 16q12 to q13 genes.

Asians such as Taiwanese and Chinese populations have higher risk for the benign tumor. There are only 2.75 cases of trichoepithelioma that are being diagnosed every year. Since it is a benign condition, it does not lead to serious conditions; however, it can lead to face disfigurement because of the growth of the small tumors.

The chromosome responsible for trichoepithelioma contains tumor suppressor genes. Because of the mutation of this chromosome, there is cellular proliferation because of the absence or poor functioning of the tumor suppressor genes. In addition, trichoepithelioma arises from the hair structures specifically the hair bulge causing the growth of rudimentary hair follicles.

The primary symptom of the condition is the growth of small tumors characterized as:

Trichoepithelioma is usually associated with other skin conditions such as Trichofolliculoma, syringoma and milia because of almost similar manifestations.

Diagnosis of the condition depends on the physical examination as well as other laboratory tests. Diagnostic procedures done include:

The primary treatment for trichoepithelioma is surgical care. However, some studies support the use of some topical medications. Treatments include:

Surgery involves the permanent removal of the lesions, which is helpful in improving the face of the client. Although trichoepithelioma is benign, people having it want to remove the tumors for aesthetic purposes. Surgery for trichoepithelioma includes:

Excision can be done for solitary lesions, but is not advisable for multiple lesions.

Skin grafting may also be employed involving the removal of the skin layer containing the tumors and replacing it with healthy skin that may come from other parts of the body or from other compatible donors.

Laser surgery employs the use of carbon dioxide or other compounds to remove the lesions.

Dermabrasion is the removal of the upper layers or surfaces of the skin through the use of abrasive materials. Dermabrasion may result in redness and a raw-looking skin that may heal for a matter of days or weeks.

Surgical procedures may cause permanent scarring on the face; however, this may only be minimal, as compared to the physical effects of trichoepithelioma on the face.

Imiquimod cream can be applied to cutaneous tumors to improve the appearance. However, this management is usually not effective in eradicating the tumor and patients may only have partial response towards it.

Trichoepithelioma does not result in complications, aside from being recurrent when partial treatments are involved. Surgical removal may also lead to mild, permanent scarring on the face.

Being an autosomal dominant trait affecting the genes, there really is no prevention for trichoepithelioma for those who have the genetic predisposition. 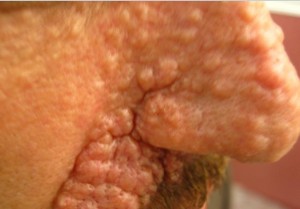 Trichoepithelioma in the Nose: Note the Appearance in Clusters 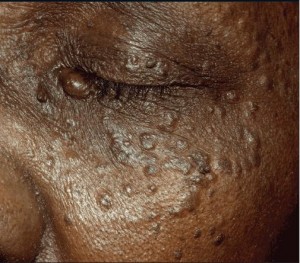 Trichoepithelioma in the Eye area 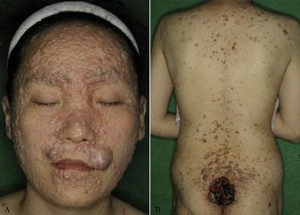 Familial Trichoepithelioma on Different parts of the Body