What is Gum Cancer?

Gum cancer is the malignancy of the soft tissue around the teeth, including the bones of the jaw underlying the teeth. Gum cancer is a type of oral cancer that affects predominantly males. It is also often called gingival cancer. 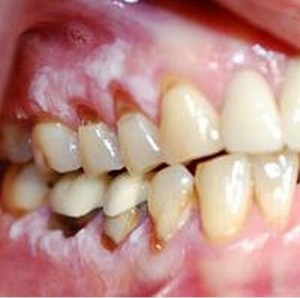 Gingival cancer can occur as a primary malignant tumor or as a metastatic site of other head and neck cancers. Gum cancer occurs in the form of squamous cell carcinoma, which means that the lining of the gums and mouth are affected.

Gum cancer is also highly metastatic because of being lymphoproliferative. This means that gum cancer cells are able to spread to other parts of the body through the lymphatic system. In fact, the most common site of metastasis is in the lymph nodes especially in the neck. Despite this, the progression of the disease is slow and early stages may be asymptomatic.

Signs and symptoms of gum cancer include those that affect the gums, teeth and oral cavity. These include:

Gum cancer can affect the teeth and may eventually cause complete absence of teeth. The roots of teeth can be affected, leading to dislocation, despite absence of cavities or damage. The earliest sign of gum cancer is gum bleeding. Often, people disregard this symptom thinking that it is just caused by trauma from brushing. However, gum bleeding in gingival cancer may occur, despite using a soft-bristled toothbrush. Smoking also masks discoloration of the gums caused by cancer since tar contained in cigarettes also causes gum discoloration. 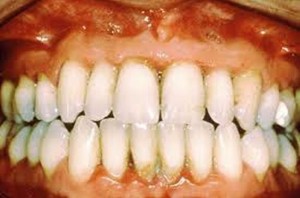 Periodontal Gum Disease as a Leading Cause of Gum Cancer

Causes and risk factors for gum cancer are similar to the general predisposing factors of oral cancer. These include:

Presence of irritating chemicals in alcohol leads to changes in the cells of the gums. Alcohol produces drying effects on the gums, which leads to cellular dehydration. Chronic injury to the gums by chronic alcoholism produces abnormal cellular proliferation in an attempt to repair the injury, leading to tumor growth.

Smoking and Tobacco Use

Cigarette smoke and tobacco contains several carcinogenic chemicals that may lead to gum cancer. Smoking is attributed to most of the cases of oral cancer.

Certain populations of the world, such as Asian, have a traditional culture of chewing betel nut for dental purposes. However, dentists discourage the use of betel nut because it may lead to staining of the teeth, cavities, and even gingival and oral cancers.

Human Papilloma Virus may also spread to the mouth through unsafe sex practices. HPV produces cell changes in the gums and may lead to gingival cancer, aside from causing cervical and vulvar cancer.

Chronic gingivitis and presence of periodontal abscess may also lead to gum cancer. Ill-fitting dentures, dental appliances and improper use of a toothbrush may also irritate the gums and cause cellular changes on the lining.

The male population is at more risk for gum cancer because of lifestyle factors such as smoking and alcoholic beverage drinking, which are more commonplace and frequent among males.

The diagnosis of gum cancer involves the following:

A thorough medical history is done to assess previous diseases that may cause gum cancer. Risk factors are also assessed by determining the social and lifestyle history of the patient. Dietary and dental history is also assessed.

Physical examination of the gums is usually done by oral specialists or dentists. Examination includes thorough assessment of the gums and teeth including the whole oral cavity to determine any spread or underlying causes.

Physicians usually collect tissue samples from gingival ulcers and tumors and subject it to histologic examinations. Biopsy is the only test that determines malignancy in the gums.

Dental X-ray and X-ray of the skull may also be performed to determine presence of tumors in the gums and other parts of the head.

Physicians may order further imaging tests such as MRI to have a more definite assessment of tumors and their location.

Surgery involves the removal of the gum tumor and is the first line of treatment for malignant tumors. Maxillectomy may be employed when the tumor has spread to the maxilla and palate. Radical neck dissection is also done when lymph node spread has occurred.

Chemotherapy is usually employed after surgery to kill cancer cells that have spread to other areas of the body. Combination drugs or single medication may be used. The administration of chemotherapy may potentially lead to bone marrow suppression because of destruction of normal cells, aside from the cancerous cells. Side-effects include anorexia, temporary hair loss, nausea, vomiting, and weight loss. Pre-chemotherapy drugs are also given, such as anti-emetics, to reduce side-effects of chemotherapy.

Radiation therapy is also instituted as adjunct therapy to surgery to stop the spread and growth of malignant cells. Radiation is a localized management where radiation is directed on the tumor site.

The use of cetuximab (Erbitux) targets cancerous cells specifically, which has fewer side-effects than chemotherapy. This drug targets the growth factor receptors, which prevents further tumor growth.

Patients with gum cancer should be assisted in returning to usual activities specifically, those involving eating and speaking. Patients should be taught to consume small frequent meals, consisting of a soft diet, to avoid undue tension in the teeth and gums. Speech therapy may also be employed to help the patient speak normally after surgery.
Reconstructive surgery may also be recommended to address disfiguring affects of gum and oral surgeries. Dental prosthesis is also available to restore the normal appearance of the gums, teeth, and mouth.

Gum cancer has a good prognosis when detected at an early stage. Just like with any forms of cancer, distant metastasis provides the most unfavorable picture for patients. However, gum cancer has slow progression, which means that further spread of malignant cells is effectively prevented when treatments are instituted. The most common sites for metastases are the other parts of the oral cavity, lymph nodes, pharynx, larynx and thyroid gland. The mean 5 year survival rate of gum cancer is up to 70 to 80%, which is high when compared to other types of cancers.

Gum cancer also leads to complications resulting from affectation of other parts of the oral cavity and throat. Complications include:

Gum cancers should be detected early in order for early management to be instituted. However, prevention is still the best key in managing gum cancers, which involves avoidance of the modifiable risk factors. 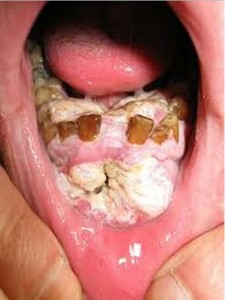 Advanced Gum Cancer Affecting the Rest of the Oral Cavity 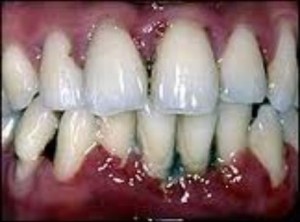 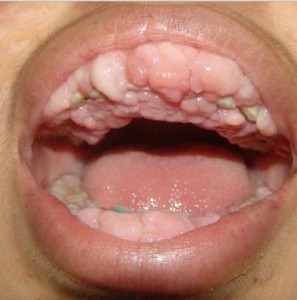 Stage I gum cancer involves the growth of tumor, which is less than 2 cm in size. This stage does not involve lymph node spread yet.

The tumor on the gum is more than 2 cm, but less than 4 cm in size. Still, there is no lymph node spread yet.