What is Acoustic Neuroma?

About one in every 100,000 population worldwide is affected by acoustic neuroma. It comprises 10% of all neoplasms in the cranium in adults. Individuals above 50 years old are more at risks for developing it. Both the male and female gender may be affected.

The tumor usually grows slowly and may reach up to one inch in size. Acoustic neuroma is not a form of cancer, but as it grows, it compresses the vestibulocochlear nerves resulting in hearing and balance problems. It can also extend into the angle between the pons and cerebellum and may compress the 5th, 7th, 9th and 10th cranial nerves. Compressing the other cranial nerves will result in problems related to the function of the compressed nerves. Growing tumors may even compress the medulla resulting in cerebrospinal fluid obstruction eventually leading to increase in intracranial pressure. 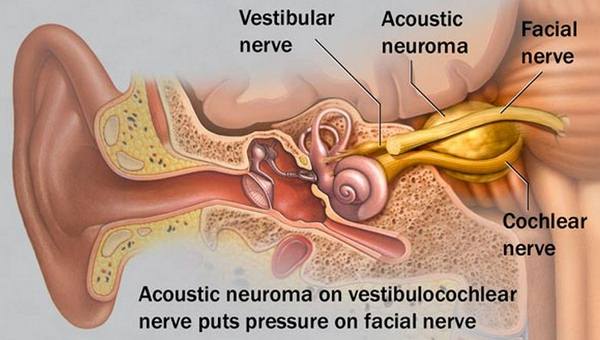 Symptoms of acoustic neuroma are associated with the compression of the vestibulocochlear nerve and other adjacent nerves and structures. Symptoms include:

Affectation of other structures such as the brain stem (medulla and the pons) and cerebellum may lead to life-threatening conditions because it may cause impairment in the respiratory function as manifested by shortness of breath and difficulty breathing.

Causes and risk factors involve any affectations in the vestibulocochlear nerve such as:

Imaging studies are the typical diagnostic tests done to detect tumors inside the cranium. These include:

Computed Tomography Scan – Contrast-enhanced CT-scan involves the use of contrast medium, usually an iodine based dye to detect tumor growth. CT scans are able to detect tumors that are 1.5 to 2.0 cm in size.

Physicians usually institute conservative measures such as observing the tumor using imaging studies. Some of the tumors shrink and may not need advanced treatments. Tumors that appear to grow and compress structures may need radiation and surgery.

Radiation therapy is done to suppress or slow down the growth of acoustic neuroma tumors.

Radiation therapy does not remove tumors, but the tumors are surgically removed after the therapy. Radiation involves various types such as proton therapy, Cyberknife, gamma knife radiosurgery or fractionated stereotactic radiotherapy.

Radiation therapy poses some risks such as progression of the acoustic neuroma to a malignant tumor and development of other tumors on adjacent structure. However, the incidence of such is low. To evaluate the result of the radiation therapy, yearly imaging tests should be done to determine any progression or re-growth of the tumor.

Surgery has been the only management to completely eradicate the tumor. Surgery is also employed to large tumors, tumors that grow fast, and tumors that develop signs and symptoms. There are several approaches that can be performed during surgery. It requires a highly technical procedure involving neurosurgeons and otorhinolaryngologists.

Microsurgery involves the removal of the tumor together with the inferior and superior vestibular nerves. Because of this, vestibular function on the affected side may be lost. However, the nerve on the other ear can still perform the function that’s why the patient is still able to hear.

Three types of surgery can be employed such as:

Translabyrinthine Approach – This is the safest approach because it does not employ brain retraction however; it often leads to complete destruction of hearing on the operative side. Because of this, people who have already poor speech discrimination on the affected ear are the ones undergoing this approach.

Suboccipital Retrosigmoid Approach – This procedure is one of the hearing preservation approaches and is preferred by neurosurgeons because they are more familiar with the surgery.

Middle Fossa Approach – This is also one of the two approaches that preserve the hearing. This procedure is more advantageous than the retrosigmoid approach because of more direct access to the internal auditory canal.

Endoscopic Surgery – Endoscopic surgery is a minimally invasive surgery which involves the use of scope. This is usually done in specialized centers.

Undergoing surgery also poses risks especially when other structures are affected during the procedure. Complications include leakage of cerebrospinal fluid, tinnitus, persistent headache and balance and gait problems.

Acoustic neuroma has good prognosis because it is not malignant. Small tumors may not even require any surgery. It does not spread to other parts of the body. But because the tumor increases in size, it can compress other structures that may lead to serious conditions such as:

Once a patient had hearing loss, it cannot be returned even after surgery. One should contact a medical provider when symptoms occur such as gradual hearing loss and gait problems for early detection and management of acoustic neuroma.