Pancoast tumor, first described in 1924 by American radiologist Henry Pancoast, is a benign or malignant tumor which arises in the upper lung (apex) commonly situated in the right upper corner and which often affects the apical chest wall structures. It can also spread to neighboring parts of the body like the ribs, lymph nodes, vertebrae, and nerves. More than 95 percent of patients with Pancoast tumor have non-small cell lung cancer, and less than 5 percent suffer from small cell lung cancer.

Pancoast syndrome, which is caused by a tumor in the apex of the lungs, involves the first and second ribs, vertebral column, spinal cord, and brachial plexus. It consists of pain, weakness, or numbness that starts from the shoulder and radiates to the arm and hand.

In severe situations, pancoast tumor can give rise to Horner’s syndrome, whose symptoms include constriction of the pupils (miosis), drooping of the eyelid (ptosis), lack of sweating (anhidrosis), and sunken eyeballs (enophthalmos).

The tumor compresses the laryngeal nerve, resulting in bovine cough and hoarseness of voice.

Paraplegia or paralysis of the lower half part of the body can occur when the tumor has reached the intervertebral foramina. It can also affect both legs.

It is the sensation of tingling, burning, pricking, and numbness in the skin which often occurs in the hands, arm, and forearm. This may also involve weakness secondary to atrophy. 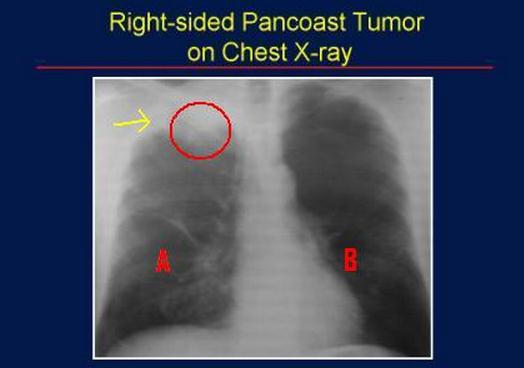 CT scan of the chest is obtained to further distinguish the characteristic of the lesion  and to assess the enlarged size of nearby organs like lymph nodes as well as the liver and adrenal glands for possible metastases.

In patients without metastatic disease, MRI should be obtained to assess tumor resectability. MRI is the most ideal procedure to examine the extension of the tumor and the involvement of other structures of the body like bone structures and the brachial plexus.

Confirmation through cytology can be obtained by fine-needle aspiration of the mass.

Treatment consists of chemotherapy and radiation therapy given prior to surgical procedures. This mode of treatment is now the standard of care with an acceptable 5-year survival rate. Postoperative radiation therapy can also be applied to achieve reduction of circulating tumor cells and eradication of subclinical metastases not recognized during surgery.

Surgery is the primary treatment for pancoast tumor. This may involve the removal of the apex of the lungs along with related affected structures. Before the surgery, the doctor will evaluate the pulmonary function of the patient and will also need to determine the location and degree of the tumor. Lobectomy can be the option for tumor located at the center of the lobe. Pneumonectomy is the procedure of choice for cases involving the extension of tumor which affects the orifice of the lobar bronchus and involves more than one lobe.