Chondrosarcoma is a malignant tumor of the category known as sarcomas. It is composed of transformed cells that produce cartilage. Cartilage is flexible connective tissue found in many areas in the bodies of humans and other animals. Chondrosarcoma is more common in men than in women and among older people than among children. Grade 1 chondrosarcoma is relatively slow-growing, so patients are not aware of it until there is a noticeable lump or they have felt it. 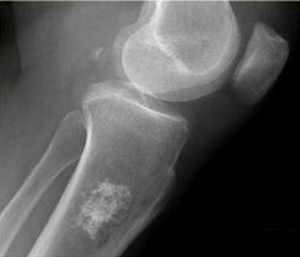 This condition does not have symptoms in its early stages, and is usually diagnosed after the appearance of the symptoms. I have listed down the symptoms of Leiomyosarcoma (an aggressive soft tissue sarcoma derived from smooth muscle cells typically of uterine, gastrointestinal or soft tissue origin).

The cancer is low-grade and is contained within the bone.

The cancer is low-grade and extends outside the bone into the soft tissue spaces, which contain nerves and blood vessels.

The cancer is high-grade and is contained within the hard coating of the bone.

The cancer is high-grade and extends outside the bone into the soft tissue spaces, which contain nerves and blood vessels.

The cancer can be low-grade or high-grade and is found either within the bone or outside it. The cancer has also spread to other parts of the body, or to other bones not directly connected to the bone where the tumor started.

Often there are no symptoms and diagnosis can be accidental, while seeking the cause of something else. By the time symptoms occur, the tumor has often spread and is impeding normal bodily functions. Expert advice and a series of tests are necessary for accurate diagnosis and to rule out leiomyosarcoma. These tests may include:

This therapy is used to kill cancer cells and though not commonly used to treat chondrosarcoma, it can be used in special cases when the affected part cannot be perfectly excised by using surgery.

At one time, the only solution for this condition was amputation (removal of a limb). Fortunately, modern surgical procedures have developed that allow the surgeon to remove the cartilage and replace it with a prosthesis (artificial cartilage) to mimic the normal function of the removed cartilage.

This procedure is not used alone in this type of sarcoma but is used in combination with surgery to kill any cancer cells remaining after the surgery. 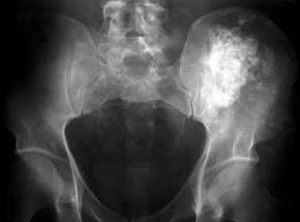 Chondrosarcoma of the Hip Bone 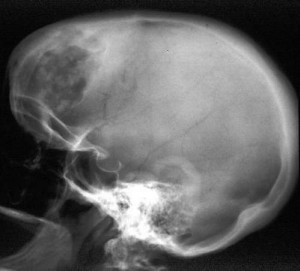 Chondrosarcoma of the Skull as shown ion CT-Scan