What Is Neuroendocrine Cancer?

Before answering this question, a more basic question is what the neuroendocrine system is. The nervous system is the basic regulation system of any animal body. It is the centrally connected system, joined to the spinal cord or the brain through various nerves.

Any action conducted by us is transmitted in the form of messages or electrical synaptic messages through these nerves. On the other hand, the endocrine system is made up of the various glands throughout our body which release tiny dosages of hormones.

Malignant or unregulated cell growths in this system can cause serious problems to humans. This is known as neuroendocrine cancer (NEC). Statistics show that around 8-10000 people in UK are already affected by NEC and about 1500-2000 more are diagnosed every year. NEC can occur in any organ which acts as a common interface to the 2 related systems, like in the lungs, pancreas or the gastrointestinal regions. 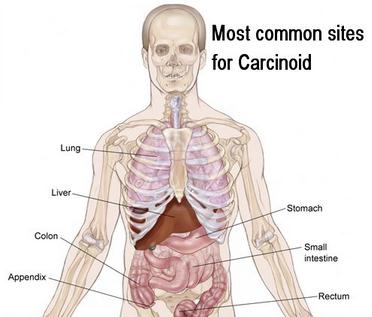 Neuroendocrine systems are mainly concerned with releasing hormones based on neurotic impulses. Hence, the main parts affected by the aggressive varieties of the Neuroendocrine Tumour (NET) include hormonal abnormalities like low blood sugar or heart problems.

Even more obvious signs like constant recurrence of diarrhoea or constipation can be an indication of a NET in the digestive tract. NETs are divided into 2 main categories. Carcinoid tumours occur in the lower bowel, specifically the ileum. These tumours are usually benign and hence not usually detected.

They are mostly discovered by chance when operating for something else and are hence known as coincidental carcinoids. It has been estimated that 1 in every 10 people have this kind of NET. The more aggressive varieties however can be quite dangerous and include a wide variety of problems including asthma and heart failure. The second major category of NET is the Pancreatic Endocrine Tumour (PET).

These are estimated to arise from the cells in the islets of Langerhans in the pancreas or the cells just outside the pancreas. Only 1-2% of all pancreatic tumours fall under this category.

Besides these, NEC can also occur in the lungs, primarily because of excessive tobacco, causing wheezes or persistent coughing. Pheochromocytoma, or cancer occurring in the adrenaline producing glands, causing excess of adrenaline production, though rare, can be fatal. This is because in any injury, excess adrenaline can significantly increase heart rate and blood pressure.

We also have Merkel Cell Cancer which causes the neuroendocrine glands under the skin to malfunction. This manifests itself primarily in the form of malignant aggressive cell growth in the hair follicles beneath the skin.

Treatment for NEC begins with early detection. If detected early, it is not that dangerous. One can use various detection techniques beginning with traditional ones like tumour marker tests (e.g. Chromogranin A) to nuclear medical imaging (like octreotide scan). Of course, there are also various other scans like Positron Emission Tomography (PET), Computerised Tomography (CT) or Magnetic Resonance Imaging (MRI) which are just as effective. But mere diagnosis is nothing if the symptoms are not treated soon enough. One can opt for Peptide Regulator Receptor Therapy (PPRT) or radio frequency ablation (which uses heat to destroy affected cell) for the treatment. Chemotherapy at regular intervals is also an option.

Prognosis refers to the doctor’s analysis of any disease. NEC is unique to everyone. This is primarily because neuroendocrine cells occur at various regions throughout the body.

Hence, an expert analysis of your particular situation is needed to offer any advice. But these depend primarily on a few factors, beginning with the grade of tumour affecting the neuroendocrine gland in question.

Grade 1 tumours are easier to control than grade 3 aggressive types. It is easier to remove any tumour that has not spread and are well differentiated, primarily because surgery options are much easier. However, the most important aspect with this disease, as with any other, is the speed of action on your part. The faster it is detected and operated on the lesser complications you would face.

With proper care, NEC can be controlled to a high extent. Of course, the area affected matters just as much.

It has been found that with a NET in the appendix, survival rate is 86-100% while that goes down significantly to 42-72% if it occurs in the colon or rectum.

In general, if the tumour is detected early on, life expectancy is as high as 10-15 years with regular check-ups and mild dosages of chemotherapy to keep it from recurring. However, if the nerve cells are already affected, like in metastatic pancreatic NET, the life expectancy can go down to as little as 23 months.

Even though this kind of condition is quite rare, it can still be life threatening unless you follow it up with frequent check-ups for controlling chances of recurring, starting early on.

Karl M McDonald is a free lance writer specializing in the field of genetics and DNA testing. Articles by the author can be found on many blogs and info sites, including the article knowledge base for homeDNAdirect Ireland. Karl currently lives in West Sussex, UK with his wife, kids and 2 dogs.