What is Stage 4 Pancreatic Cancer? 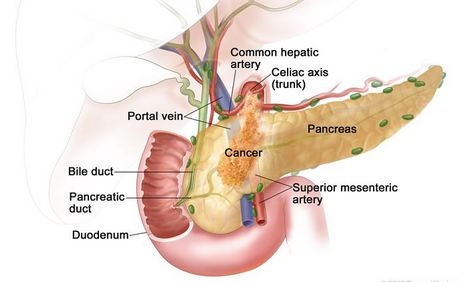 The spread of pancreatic cancer in the body occurs through lymphatic system. Once the cancerous cells spread in other body parts, it is referred as metastatic pancreatic cancer. Stage 4 pancreatic cancer is known as deadliest cancerous form as it spreads silently without indication many symptoms.  If the conditions are diagnosed in time, then the patient can undergo proper medication to combat the condition.  However, there is no cure available at stage 4 cancer. Medication can increase the span of life up to few years.  Mentioned below are the symptoms of the condition.

Generally, it is very difficult to diagnose pancreatic cancer in early stages. A symptom of the condition depends   on the location and condition of tumor. Mostly people misunderstood the signs of early stages of pancreatic cancer with other nonserious digestive problems. The cancerous cell silently affects the nearby tissues in pancreases that increase the probability of death in patients.  According to the oncologists, patients who are above 50 years diagnosed with diabetes and experiences frequent weight loss are at risk of developing pancreatic cancer.

The condition of stage 4 pancreatic cancer is known to have a poor prognosis.  When compared with other forms of cancer, the median survival rate even after diagnosis at an early stage is worst. In early stages, if the tumor with less than 3cm of diameter is removed than the patients can expect long life expectancy.  But the aggressive nature of the cancer and lower diagnostic rate makes the condition worse. Five year survival rate for stage 4 pancreatic cancers is less than 5 percent that indicates that 95 percent of patients diagnosed with the condition might not live up to 5 years.