Choriocarcinoma is a malignancy of placental origin. It is an aggressive form of cancer originating from the trophoblast cells in the placenta. It has a fast spread to the lungs even early in the disease. Choriocarcinoma starts as a gestational trophoblastic disease and progresses to a malignancy. It is more common in women, but may also affect men. It is considered a germ cell tumor that develops from the ovaries and testes. 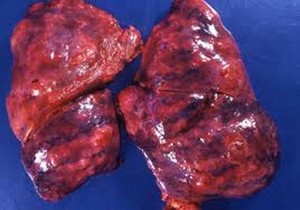 Choriocarcinoma In the Lungs as a Metastatic Disease

The malignant cells start in the syncytiotrophoblats and cytotrophoblasts that are responsible for the formation of the fetal structures and placenta. During embryonic development, there is no formation of placental villi. It occurs in the uterus and forms abnormal cells in the tissues that would normally form the placenta.

Choriocarcinoma is uncommon, but a highly curable malignancy associated in pregnancy. Because of the problems in the placenta, a fetus may or may not develop. It may also be called as trophoblastic tumor, chorioblastoma, chorioepithelioma or gestational trophoblastic neoplasia.

What Symptoms Present in Choriocarcinoma?

Manifestations of choriocarcinoma include:

Staging of choriocarcinoma follows the FIGO staging system of uterine cancer. Different stages are described as: 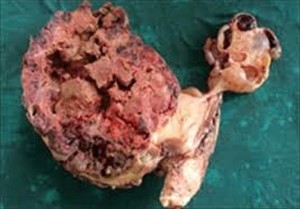 Choriocarcinoma in the Ovaries

Diagnostic tests are done to detect trophoblastic malignancy. These include: 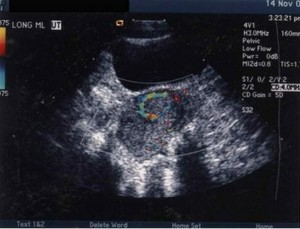 Ultrasound Showing Choriocarcinoma in the Uterus

There are a lot of treatment modalities for choriocarcinoma, which include:

Choriocarcinoma is one of the tumors that are very responsive to chemotherapy, except for the case of choriocarcinoma in the testicles. The treatment rate is as high as 95%. Patients with no metastases have a high recovery rate. However, when metastases are already present in the brain and liver, the condition is usually fatal. The drug of choice for chemotherapy in low-risk disease is methotrexate. For intermediate and high-risk conditions, EMACO is employed, which consists of etoposide, methotrexate, actinomycin, cyclosporine and vincristine.

The removal of the uterus or hysterectomy is usually employed for women aged 40 years and above. Patients with severe bleeding and severe infection are also required to undergo the procedure. Pregnant women with hydatidiform mole are required to undergo dilatation and curettage to remove the mole. Patients should be educated that the condition will not develop a baby. In this regard, counseling and emotional support is needed to allow the mother to grieve effectively with the loss of the pregnancy, which she assumed to be normal.

Radiation therapy is also employed for choriocarcinoma that has metastasized to the other body organs.

Choriocarcinoma is highly treatable when metastases are not yet present. Women may also regain their optimal reproductive function. Poor prognosis of choriocarcinoma is associated with the following conditions:

Women may also have remissions, but may have more severe condition once the malignancy becomes active.