What is laryngeal cancer?

Generally, laryngeal cancer is a type of neck and head cancer. It is also known as laryngeal carcinoma or cancer of the larynx. It is a medical condition wherein there is an abnormal growth of cells affecting the larynx (the voice box located at the throat’s back). The larynx, a vital organ, plays three important roles which aid in breathing, talking, and swallowing of food. Anatomically speaking, there are three parts of the larynx: subglottis, glottis, and supraglottis. The cancer can start to grow anywhere in these parts. 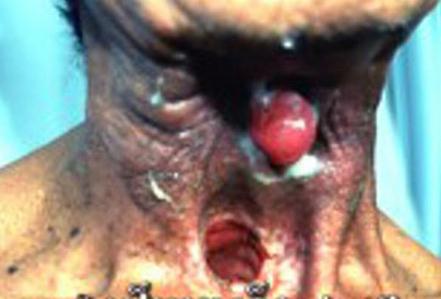 People with laryngeal cancer will experience some or all of the following symptoms:

Risk factor is a medical term that refers to the chance of acquiring this kind of medical condition. The following are the risk factors and the causes which will bring about the occurrence of this kind of disease condition:

Heavy alcoholic consumption – According to studies, heavy drinkers of alcohol have a higher chance of laryngeal cancer.


Smoking – Smoking, particularly the use of tobacco, can lead to the acquisition of neck and head cancer such as laryngeal cancer.

Genes – Some people with mutations in certain genes have an increased risk of laryngeal cancer.

Race – Laryngeal cancer is most common among African Americans.

Gastroesophageal reflux disease – This is a type of disease wherein the acid coming from one’s stomach regurgitates or returns to the esophagus. Studies have linked this medical condition to laryngeal cancer.

Laryngeal cancer can be basically classified as either intrinsic or extrinsic. The intrinsic type is found in the true vocal cords or the glottis area and does not have the ability to spread elsewhere, while the extrinsic type spreads early and can be located in the other regions of the larynx.

The goal of laryngeal cancer treatment is to remove the cancer and prevent it from spreading to other parts of the body. The basic treatment management of laryngeal cancer deals with surgery, radiotherapy, and chemotherapy. Surgery deals with the removal of the tumor, radiotherapy focuses on the use of radiation to kill the cancer cells, and chemotherapy deals with the use of cancer toxic medications to eradicate and prevent further spread of the cancerous cells.

The ICD 9 code is a medical coding that is used by medical practitioners to determine the source or origin of cancer. When a person is diagnosed with laryngeal cancer, he or she will have an ICD 9 code of 161.9.