What is Papillary Thyroid Cancer?

Papillary Thyroid Cancer is also called as papillary thyroid carcinoma and it is the most common kind of thyroid cancer. Women are most commonly the ones reported to have it. It is a well-differentiated type of thyroid cancer, which may be overt or have minimal invasion. This is often seen in persons between the ages 20 and 50 years old and is often reportedly seen in Caucasian persons.

It appears as a cystic or solid irregular mass in a normal parenchyma of the thyroid gland. It is firm, single, free movable and asymptomatic in nature. Histologically speaking, it is a tumor that is un-encapsulated with follicular and papillary structures. In addition, there is a presence of branching of the papillae, which is composed of stratified or single lining of columnar to cuboidal cells and central fibrovascular core. The nuclei of the cancer cells have an appearance of ground glass. 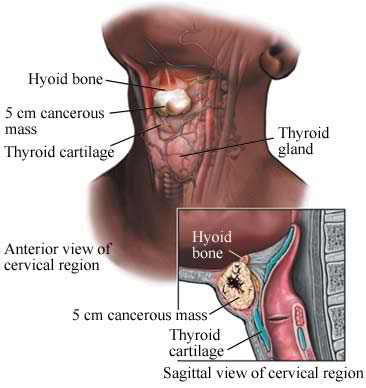 The good thing about it is that it is curable. However, most often the persons with this disease do not know that they actually have it because it is often asymptomatic.

Most often, persons who are diagnosed with papillary thyroid cancer do not manifest or complain of symptoms. They are asymptomatic in nature. Early in the course of this disease condition, one may have unnoticeable symptoms. As the disease progresses, the person may notice lump in the frontal portion of the neck, which is medically termed as the thyroid nodule. The mass is often reported as painless. Other symptoms include:

Person who have had to undergo radiation therapy in their upper chest, neck and head area are at risk for developing this disease condition. In addition, common cancers associated with the exposure to radiation of the thyroid gland include lymphoma, breast cancer, lung cancer and head and neck cancer.

Back in the days, x-ray treatment were widely used in the treatment of ringworm, enlargement of the tonsils, thymus enlarged gland, lymphomas to measurement of the sizes of the foot. Children who fall younger than 15 years are the ones who are more sensitive to the damages brought about by radioactive substance towards their thyroid glands.

Radioactivity that is released in nuclear accidents, which is an example of environmental exposure, may lead to the acquisition of papillary thyroid cancer. Another example is those who work at radiation plants or fields are at high risk of getting this disease condition.

The treatment of papillary thyroid cancer deals with three treatment methods, which are surgery, radioactive iodine and thyroid hormone replacement.

For aggressive tumors, this is often used as a treatment for follow-up procedure. This is considered to be a safe therapy due to the fact that the cells of the thyroid gland are absorbing it. What happens is that the thyroid cells absorb the radioactive iodine, which leads to its destruction. The negative thing about it is that healthy thyroid cells can also absorb the radioactive iodine.

This treatment is given for persons who have undergone a surgical procedure. This will aid in the management of hypothyroidism after the total or partial thyroid gland is removed. This treatment involves the intake of T4 hormones.