What is Pancreatic Cancer?

Pancreatic cancer affects the pancreas, and is one of the most aggressive types of cancer. Most often, this type of cancer can’t be detected earlier and has a poor prognosis. 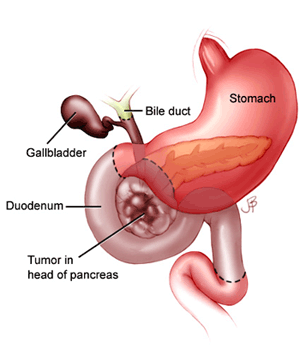 Tumor on the Head of the Pancreas

People who have pancreatic cancer will manifest the following symptoms and signs:

There are a lot of causes that could trigger the development of pancreatic cancer. The cause for one person with pancreatic cancer will vary from another person who also shares the same disease. The following are the common etiological or risk factors in this kind of disease condition:

There are two types of genetic reasons that experts have found to link with pancreatic cancer. One is the DNA type and the other is the family type or hereditary.

Here there is a mutation or damage to the DNA and to the genes involved in the normal division of the cell. This will lead to the erratic cellular division.  Cancer will occur when the mutation of the gene is unable to correct the damaged DNA and it is also unable to undergo apoptosis or cellular suicide.  This kind of genetic trait is a result from after birth rather from inheriting it from your parents.

This is a gene that can be inherited from any member of the family. This kind of gene is innate in nature, which leads to the person developing pancreatic cancer later in his or her life.

This is practically the most common cause that leads to a person developing pancreatic cancer. According to reports, it mostly exists in African American males and those who smoke cigars or tobacco or who drink alcoholic beverages heavily.  In addition, obesity and diet is also linked to the development of pancreatic cancer. Aside from that, those who have sedentary lifestyle or those who do not do any form of exercise are at high risk for acquiring this disease condition. Also, persons who eat small amounts of vegetables and fruits and consume high quantities of meat are at much higher risk of having this kind of disease condition.

Staging of pancreatic cancer is done to determine the extent of the disease condition. This is also the primary basis of the treatment that will be provided. Staging is known after the patient has undergone tests.  The following are the stages of pancreatic cancer:

The tumor is still described as pancreatic carcinoma in situ and it is confined in the pancreas without metastasis.

Here, the tumor has not yet spread to nearby organs and it is confined to the pancreas. Its size is 2 centimeters.

Here, the tumor is larger than 2 centimeters and is still confined in the pancreas without metastasis.

Here, the pancreatic tumor has grown outside of the pancreas but has not invaded in the large blood vessels.

Here, the tumor has already spread to surrounding lymph nodes without invading the large blood vessels.

Here, the pancreas cancer has already begun to spread to the surrounding large blood vessels or nerves and to lymph nodes.

This is the worst stage of pancreatic cancer, where it has already spread to distant areas or organs.

In diagnosing pancreas cancer, the following tests should be undergone:

In treating pancreatic cancer, the following are recommended by physicians and medical experts:

Surgery is the primary treatment for pancreatic cancer.  It is the ideal treatment especially to persons who are in the early stages or those whose cancer cells are confined to the pancreas. Surgery is the act of removing part or all of the parts of the pancreas that is affected by the cancer.  The common surgical procedures done are total pancreatectomy, distal pancreatectomy and Whipple procedure. 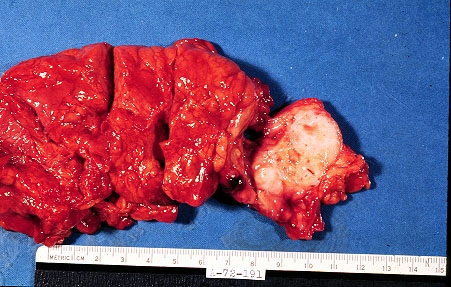 The radiation therapy is a kind of treatment, which targets the destruction of cancer to prevent metastasis and from its abnormal production. It uses a high-energy form of x-rays which will lead the cancer cells to commit apoptosis or cellular suicide.

Chemotherapy makes use of the powerful pharmacological chemical treatment, which interferes in cellular division procedure, which also leads to the cancer cells to commit suicide or medically referred to as apoptosis.

This is a vital aspect in the care of persons with pancreatic cancer. Pain can be controlled. The attack of the pain management is done via aggressive therapy that has constant assessment. It makes use of pharmacological treatment that is classified under opioid or non-opioid medications.

The targeted therapy also makes use of pharmacological treatments, which are drugs that attack abnormalities that are specific within the cellular cancer. Such medications include erlotinib, which functions by blocking the chemicals which signals the cells of the cancer to divide and grow.

As mentioned earlier, there is a poor prognosis of pancreatic cancer despite the advancement of either medical or surgical treatment procedure. It is brought about by the fact that this is a silent killer that is often only discovered in the late stages of the progression.

Generally there is a low survival rate for persons who are diagnosed with pancreatic cancer. This is attributable because of the fact that only a small percent of cases are caught while the cancerous cells are still confined in the pancreas at the time of the diagnosis. Most often, when upon diagnosing, the pancreatic cancer is already in the stage of malignancy and has spread to other parts of the body.