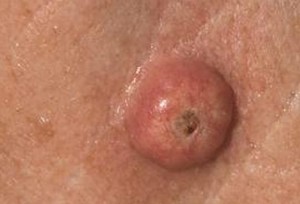 Most of the time, it grows in an area that is exposed to the sun, this includes the face, the neck, the arms, and parts of the dorsum. Generally, the colour of the lesion is pinkish to red. The lesion is at the center and it forms a circle, the lesion is black in colour. According to the patients who are affected with the condition, pain is present at the site of the lesion. I have listed some of the key characteristics of the condition.


Here is the list of key characteristics of Keratoacanthoma: 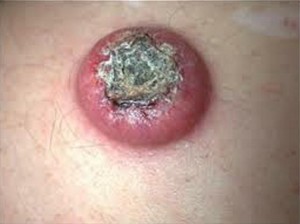 Keratoacanthoma Showing Dome shape, Inflamed skin around the lesion and scales on Top

The exact causes of Keratoacanthoma is not well defined, however, the most common factor is age; an elderly person is prone to develop skin tumours because of the skin fragility to sun and other chemicals. And just like other malignant skin condition, Keratoacanthoma can be caused by excessive exposure to ultraviolet light that came from the sun. Exposure to the sun is considered the most important causative factor for this condition. Some other cases suggest that it originated from a Human Papilloma Virus (HPV), but this hypothesis is not yet proven to be true for all cases.

Treatment is mostly surgical, if the patient preferred surgery, Mohs Surgery is often used. This is a surgical procedure that uses a narrow surgical margin to produce an excellent cure rate, but does not compromise the patient’s other organs. It is possible because it is a surgery in the microscopic level that enables minimal tissue removal. But there is a way to treat the condition if a surgery is unwanted or if the patient cannot undergo a surgical procedure. If the patient preferred non-surgical method, these are the treatment options that are available for the patient:

Drugs such as Bleomycin, Methotrexate, and 5-Fluorouracil can be used to stop the proliferation of the cancerous cells. One disadvantage of these drugs is the systemic effect of the drug. (e.g. hair loss)

Doctors prefer Retinoids to treat the lesions. This therapy is also used for patients with severe acne.

The prognosis is good for patients who undergone surgery. However, there are also recurrent tumours, in this case, patient should take action and it would require an aggressive intervention. 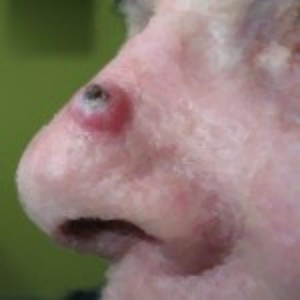 Keratoacanthoma In the Nose 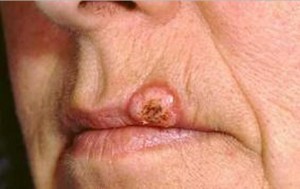 Keratoacanthoma in the Lips 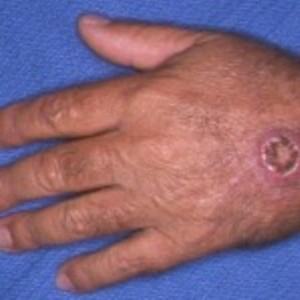 Keratoacanthoma in the Hands 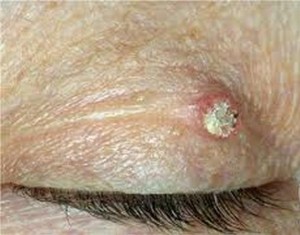 Keratoacanthoma in the Eye Lid