What is Choroidal Melanoma?

The choroidal melanoma is malignant disorder, which arises from the melanin cells present in the eye. The choroid is rich in vascular structure and therefore, the malignancy of the choroid melanoma usually not restricted to the eye, but it can spread to distant parts of the body. Choroidal melanoma is the most common eye melanoma. (1) 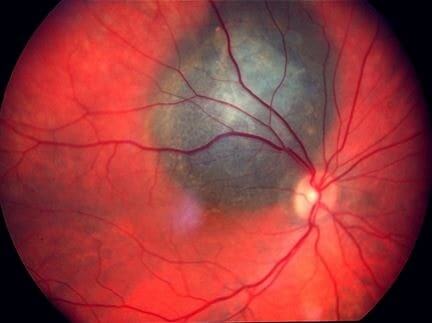 The symptoms are divided into two groups, depending upon the site and spreading of the melanoma. The initial symptoms are restricted in the eye, and if it spreads to distant parts, then cause systemic symptoms:

Some cases, early staged eye related symptoms are not prominent, but when metastases spread to distant organ, then some general symptoms arise, which include unexplained weight loss, tiredness, cough or difficulty in bladder voiding or bowel related problem. These symptoms often indicate the systemic involvement of the metastasis.

Usually the choroidal melanoma is detected during an ocular check up. The following are the signs may found by the doctor during eye check up:

In optalomological test, the eye is dilated to check up the rear side of the eye. This test provides the possible indications, and depending upon the abnormal findings, further the confirmatory tests are ordered by the ophthalmologists, which include:

A tiny device placed on the eye and sound waves is passed toward the tumor. The attached image recording machine provides the image depending upon the patterns of the wave spring back from the tumor.

Inject a fluorescent dye into an arm vein , which is adjoined with the vascular bed present behind the eye. A Series of image is clicked up quickly  during the dye pass over the eye. These images can help to diagnose the choroidal melanoma.

For undetectable case, or complex case needs an MRI, which helps to detect the characteristics of the tumor. (2,3,4)

The treatment plan depends upon the size of the choroidal melanoma tumor. This is not necessary every tumor is malignant in nature or change their size, therefore any findings of small lumps in the eye need close observation for identifying their size alteration. If the size of the tumor is increasing, then treatment needs to start immediately, so that metastases can be restricted.

Surgical intervention and radiation therapy are the usual treatment for large or medium sized choroidal melanomas.

Different techniques are used for radiation therapy. A tiny metal device is available to provide local radiation. The device contains radioactive iodine, which is attached to the sclera of the eye and the emerging rays exactly targets the tumor and gradually kill the affected melanoma cells.

Sometimes radiation therapy is applied before or after the surgical intervention to complete killing of the tumor cells.

Enucleation or complete removal of the eye is recommended for advance stage of choroidal melanoma, when the tumor size is very large. Further, the eye is replaced with a prosthetic eye and positioned into the socket.

Usually after treating the choroidal melanoma, it is always recommended the patient to go for regular cancer screening test, as the chance of spreading of malignant cells in another part of the body is higher in rate.  The involvement of the distant organs often fatal, as there is a limited option of treatment.

The radiation therapy is quite expensive than surgical intervention, but it is often not able to provide very impressive outcome, in regards to the quality of life the affected person. Other improved radiation like gamma knife is invented, but its potentiality testing is in preliminary stage. (2,3,4)

The involvement of the hepatic system cause very small duration of survival rate and the average calculated survival with a hepatic metastasis is approximately 6 months, but this can vary and the maximum survival rate is 2 years which is achievable for very less percentage of the affected persons. (4)