Thymoma is an unusual tumor of the thymus gland. The thymus gland is located in the area between the chest and the lungs, otherwise known as the anterior mediastinum. Its primary function is to aid in the development of the immune cells during childhood.

The thymus gland gradually increases in size and peaks at puberty where it weighs up to 40 grams. It then begins to shrink after this stage. Usually, the thymus gland comprises of lymphoid cells which are made up of lymphocytes or immune cells and epithelial cells (lining cells). 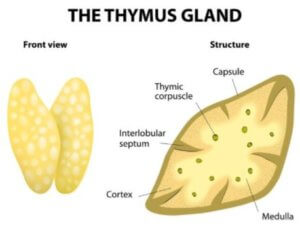 That said, Thymoma is a tumor that originates from the lining cells of the thymus. The term thymomic neoplasm is usually used to describe tumors of the thymus which consist of thymic carcinomas and thymomas.


Thymic carcinomas are tumors of the thymus that are characterized by abnormal appearance when viewed under a microscope. They are more aggressive than thymomas but only account for 1% of the total cases that are reported. 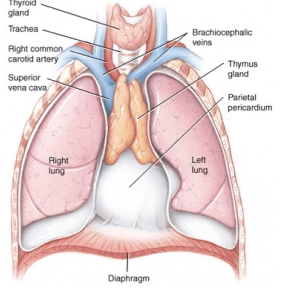 The cause of the condition is yet to be established. Thymoma is more prevalent in males than it is in females and is frequently presented between the ages of 40 and 60. There are no known risk factors that predispose a person to thymoma.

Close to half of thymomas cases are asymptomatic, meaning that they do not present any physical signs. This means a diagnosis for this condition can only be made during an imaging study of another infection.

In other instances, the tumor may grow to supersede the size of the tumor and exert heavy pressure even to the surrounding organs.

A cough, pain in the chest, and shortness of breath are among the common symptoms in case they choose to occur. Weight loss, night sweat, and fever are less common symptoms that may also occur but not necessarily.

In some instances, the condition may spread to the linings of the heart, lungs or other tissues outside the chest cavity to cause unwarranted complications.Thymic carcinomas are more aggressive and can spread both locally and distantly to cause symptoms. 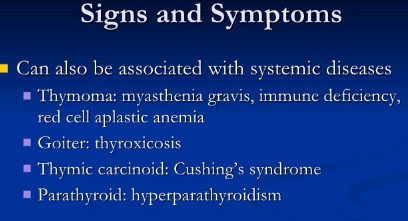 Some disorders are associated with thymoma. Medical conditions linked to cancer are referred to as paraneoplastic syndromes. It is estimated that 50% to 60% of thymoma patients are likely to develop these medical conditions than those without.

Examples of conditions associated with thymoma include myasthenia gravis which is a condition of the nerve-muscle characterized by fatigue, weakness, ptosis (drooping eyelid) double vision, and problems with swallowing.

The stage of thymoma development refers to the period through which the condition spreads to other tissues and organs of the body. There are two commonly staging systems associated with thymoma, both of which are responsible for the classification of the tumor as stage 1 and 4. The stages that are mainly marked by the extent up to which the tissues and organs surrounding the thymus gland are invaded.

While there are different methods of determining the development stages of thymoma, stage 1 tumor is mostly characterized by an encapsulated tumor surrounded by a capsular structure that has not spread to other organs.

Stage 4 tumor is represented by an opposite extreme that comprises the invasion and spread of the tumor to other organs. The tissue is classified A, B, or C based on its features. Type C thymoma is the thymic carcinoma, but it is quite rare.

Histologic and symptoms of thymoma (Staging)

If thymoma doesn’t present any symptoms, then it can only be diagnosed incidentally during an imaging scan of the chest such as x-ray, CT scan, or computerized tomography performed for another reason.

If the symptoms are visible, imaging studies and chest X-rays such as magnetic resonance imaging (MRI) scans or CT scans or a combination of both tests are carried out to ascertain the condition or the source of the symptoms.

In case a mass of the anterior mediastinum is visible during the imaging study, then, a part of it is surgically cut off and analyzed through a definitive diagnosis to establish its cause. Such cases are rare and are only performed in biopsy by pathologists in advanced cases that are considered incurable.

The biopsy should not by any chance go through, violate, or interfere with the space around the lungs. In essence, a microscopic examination of the tumor tissue is necessary to confirm the diagnosis of thymic carcinoma as well as thymoma. 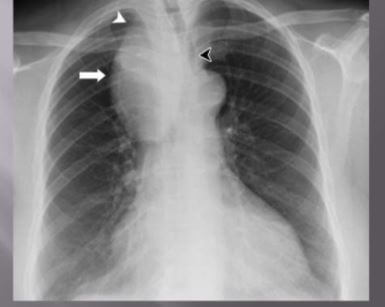 The only effective treatment for thymoma is through surgical operation. The success of the procedure mainly relies on the location of the tumor- those that can be fully removed have a higher cure rate. If all evidence of the condition is not removed and some microscopic remnants of the tumor remain after surgery

Then chemotherapy and radiation therapy can be used as alternatives to surgical resection. Chemotherapy is mostly used to cure metastatic thymoma or thymoma that cannot be surgically removed. Other associated disorders include autoimmune conditions including the underdevelopment of red blood cells in the bone marrow (red cell aplasia).

The outcome (prognosis) of thymoma is dependent on the stage of the tumor as well as the ability of the condition to be operated surgically. Thymic carcinomas is considered more severe than thymomas due to its aggressive nature. In thymoma, patients with stage 1 or stage 2 of thymoma exhibit an excellent prognosis with slow-growing tumors.

In a study of patients suffering from thymoma, out of the total number of patients whose tumors were surgically removed through operation, only 3% of the tumors recurred. Even 83% of patients with stage 3 thymoma indicated symptoms of improvement after treatment and would live for ten more years after diagnosis.

10-year survival rate for patients with stage 4 thymoma is approximated at 47%. Overall, a majority of patients with thymoma will live for at least five years while fewer than half of those suffering from thymic carcinoma can live that long.

Since the cause and risk factors of thymoma are not yet identified, its prevention is not possible.