Insulin is the hormone that is accountable for managing the body’s amount of sugar in the blood. This hormone also helps glucose to transfer into body cells from the blood. Insulinomas produce insulin. 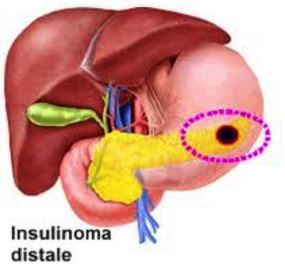 Insulinomas are benign or non-cancerous tumors of the pancreas that rarely occurs to individuals and produces too much amounts of insulin. Blood sugar normally rises when a person eats which directs the pancreas to increase its insulin production.

The pancreas will only stop making insulin if the blood sugar has returned back to normal levels. When an individual has an insulinoma tumor, the growth will keep on producing insulin. This indicates that the blood sugar level will continuously drop which could result to seriously low levels of blood sugar.

They are composed of specialized beta islet cells that secrete insulin from time to time, causing low blood sugar. These tumors usually grow slowly and could arise in any area of the pancreas. Women are more prone to these tumors rather than men. The tumors are approximately 2cm and an overall percentage of 90% of individuals have benign insulinomas and the remaining 10% are malignant.

Individuals with insulinomas do not always have obvious symptoms. Slightly low blood sugar symptoms are frequently ignored or sometimes mistaken for other conditions.

People might live their lives for several decades without being diagnosed. Other severe symptoms of the tumor can affect the brain and the adrenal glands.

These glands manage the heart rate and stress response. Some symptoms are much the same to those of epilepsy. Epilepsy is a type of neurological condition that causes seizures.

In some cases, tumors can grow larger or metastasize. These symptoms may involve:

Scientists do not know the reason why individuals get insulinomas. The growths usually show up with no warnings. The sudden appearance of an insulinoma can change the management of glucose and could result to hypoglycemia.

An insulinoma is a neuroendocrine tumor that is primarily obtained from pancreatic islet cells. About 10% of individuals with malignant tumors have a unique family syndrome which could either be multiple endocrine neoplasia type 1 (MEN 1) or von Hippel-Landau syndrome. Approximately 21% of patients with MEN 1 have insulinomas.

The diagnosis of insulinomas involves the simultaneous measurement of insulin levels and blood sugar in the blood. If the person has a high insulin level and a low blood sugar, then insulinoma is confirmed. Once the diagnosis is totally made based on the biochemical analysis, the physician will execute further studies to find the pancreatic tumor.

It is an imaging test that can produce cross-sectional images of the body to help the physician find the tumor. 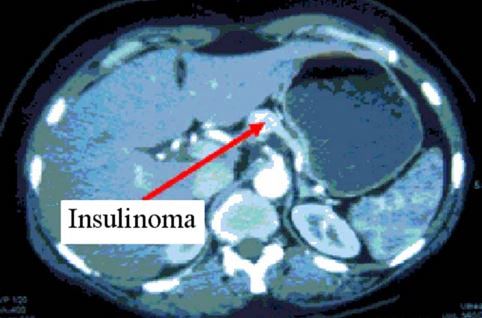 It is an imaging test that could show images of structures and organs inside the body to locate the tumor.

It is a kind of scintigraphy that could detect pancreatic neuroendocrine tumors.

This is used if the tumor cannot be seen with standard scans. The test takes pictures inside the body with the use of sound waves. The location of the tumor will be specified and a biopsy can also be taken through this test. It could help the physician distinguish whether the tumor is malignant or not.

The primary treatment for insulinomas is surgery since the symptoms of approximately 90% of patients are cured from tumor removal. Most cases of patients will not require further treatments after the tumor has been removed.

The procedures that are commonly performed for the removal of insulinoma include:

Sometimes the surgeon might remove some part of the pancreas where the tumor is situated through a whipple operation or distal pancreatectomy. These operations are only performed if needed depending on the physician’s evaluation.

The surgeon only removes the tumor itself without touching the rest of the pancreas. The recurrence rate after the procedure is very low. However, it still depends on the patient’s health status.

If one small pancreatic tumor is present, it will be removed through this procedure. It is a minimally invasive surgery that only requires a small incision.

It is a procedure that could help control the symptoms of a cancerous tumor that cannot be removed with surgery. The drugs that may be used are streptozocin and doxorubicin.

It is a therapy that can treat malignant tumors with the use of low temperatures. It could destroy abnormal tissues by freezing it.