Cholangiocarcinoma abbreviated as CCC are malignant growths that arise within the biliary duct system, originating from either the internal side or the external side of the liver, from the extrahepatic bile ducts, and then terminating at the ampulla of Vater. 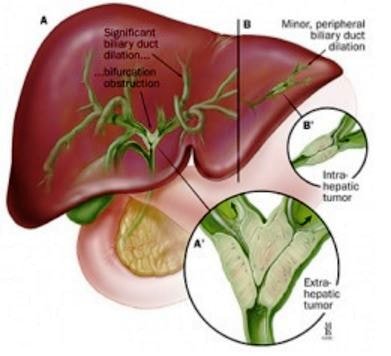 This health problem is the same as cancer of the bile duct. Above 90% of CCC cases are ductal adenocarcinomas and the rest are found to be squamous cell tumors. Its occurrence rate is 1-2 for every 100,ooo population each year; where males are more affected compared to females and manifested by individuals who are 60 years of age and above.

The characteristic clinical manifestations of cholangiocarcinoma include:

Some other symptoms of an affected person can be:

Cholangiocarcinoma are malignant tumors which are slow-growing and it can locally spread to other areas through a lymphatic system route and involving local structures like some blood vessels that feed the liver. The exact etiologic factor is yet unknown.

Predisposing risk factors which might lead to CCC development are:

Clinical diagnosis is being confirmed based on the results of the following examinations:

Diagnostic test findings can be as follows:

The staging process for cancer of the bile duct is a very significant factor needed to select treatment options available and to estimate for a patient’s prognosis in relation to CCC. Staging is being determined through the results of physical examination done, diagnostic tests and imaging tests done, and the outcome of any surgery when already performed to the patient.

The American Joint Committee on Cancer TNM system is the main system being used for the staging of cholangiocarcinoma. There are three various staging systems which are utilized among patients with cancer of the bile duct, and this depends on which specific location did it start to develop such as:

There are 3 pieces of information provided by the TNM system for staging cancer of the bile duct and they are:

Cholangiocarcinoma as a form of cancer is incurable and can be deadly, unless all the malignant tumors are surgically resected or totally removed.

Medical treatment of CCC involves any of the following:

The survival rate is basically low since about 90% of cases are not possible to have the curative resection performed. The complete removal of the malignant tumor may reach the 5-year survival from 1 among 5 patients with greater chance of complete cure with CCC. Rates can vary as 0% for nonresectable cases, with less than 5% survival in general; and 10-40% 5 year survival rates for those with surgery.

Cure from CCC is not generally possible in the failure of tumor removal. For those who undergo treatment, half among them may live a year more, and about half of them may live longer, but very rare to live beyond 5 years.

CCC foundation as a nonprofit organization aims at the cure for cancer of the bile duct through goals directed at collaboration, understanding, research and extension principles. They provide support to patients, advocate for them and make them understand more about CCC.