What is renal cell cancer?

Renal cell cancer is the most common type of kidney cancer; almost 9 out of 10 of kidney cancer cases are renal cell carcinomas (RCC). The main functions of the kidney are to filter the blood, to remove excess water and waste products, and to convert blood plasma into urine. 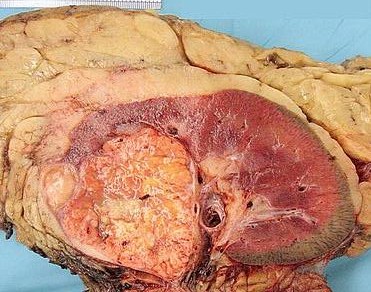 It usually grows as a single mass or tumor, but sometimes two or more tumors can grow in one kidney or even tumors in both kidneys at the same time.

It has different subtypes based on how the cancer cells appear when visualized under the microscope:

About 7 out of 10 renal cell carcinoma (RCC) cases are clear cell renal cell cancers (CCRCC), the most common type of RCC. The cancer cell appears very pale and clear when seen under a microscope.


Papillary renal cell cancer is the second most common subtype of renal cell cancer. The cancer cells or tumors form a projection similar to little fingers called papillae. Some doctors also call these chromophilic because the cells take in certain dyes and appear pink in color under the microscope.

This type of renal cell cancer constitutes approximately 5 percent of all cases of RCC. The cancer cells also appear pale just like those of CCRCC. However, compared to CCRCC, the former cells are much larger and have more specific features.

Renal cell cancer represents about 2 percent of all cancers worldwide, with the highest incidence occurring in North America and Europe. In the United States, the RCC incidence rates have increased to 3 percent per year, most common among African Americans and in people aged 55 years and older.

There are some known factors which increase the development of renal cell cancer, including:

There is an increased risk of developing renal cell cancer among people who smoke.

Obese people are more at risk of developing RCC. Studies have shown that 2 out of 10 people with renal cell cancer are obese. Obesity can cause changes in certain hormones that can lead to RCC.

Many studies have suggested that chemical exposure increases the risk of developing renal cell cancer. These chemicals include asbestos, cadmium, benzene, herbicides, and trichloroethylene.

People who belong to a family with a strong history of renal cell cancer are 2 to 4 times more likely to develop it.

Early signs and symptoms are not common in kidney cancers; however, the following abnormal symptoms could be signs of the disease:

Surgery is the primary treatment of most renal cell cancers. Chance of survival among patients who do not undergo surgery is small. The surgery depends on the stage and location of the cancer, and the cancer can be removed along with some of the kidney tissues surrounding it.

Cryotherapy or cryoablation technique, which can be applied during laparoscopy, uses extreme cold to destroy the tumor. A needle is inserted into the tumor via the skin. Using a very cold gas which passes through the hollow probe, it creates an ice ball that destroys the tumor.

Using high-energy radio waves, the tumor is destroyed through heat. A probe which is guided through the use of an ultrasound or CT scan is inserted in the skin until it reaches the tumor. Electric currents pass through the probe, destroying the tumor and cancer cells.

In this procedure, the artery is blocked to cut off the blood supply to the kidney, causing the tumor to shrink. Although it is not performed frequently, it is also done to reduce bleeding during kidney surgical procedures like nephrectomy.

Using high-energy radiation, the cancer cells are being destroyed. Radiation therapy can be used to treat renal cell cancer if the patient is too weak to undergo surgery.

Anti-cancer drugs can be administered through the vein or mouth. They enter the bloodstream and reach all areas of the body. This treatment is used to eliminate cancer that has spread to organs outside the kidney.

People without any diseases associated with renal cell cancer have a good prognosis. Unfortunately, people having other medical conditions like high cholesterol level, elevated calcium level, anemia, and cancers that have already metastasized will less likely benefit from any treatments.

The 5-year survival rate refers to the percentage of patients who live at least 5 years after their cancer is diagnosed. Since 1990s, the survival rate has increased up to 60%.